On a previous episode of this podcast, Bodhi Center’s Creative Producer Tyler Greene asked Lola how she stays grounded “in the midst of all of this?” Her reply was “I tell on myself.” On this episode, Lola continues her practice of using her own encounters with her egoic self to guide you through similar challenges.

On this episode, Lola guides listeners through the topic of abundance – specifically regarding our relationship with money. She encourages listeners to challenge limiting beliefs that may be keeping them trapped in a scarcity mindset.

I Tell On Myself

Listeners to And This Is Bodhi with Lola Wright know Lola as a master public speaker, a bold and unapologetic presence on the planet. But, as she shares, “being a loud, bold, big woman was not always easy.”

After her parents divorced, Lola left the wealthy Northern Chicago suburbs and found a greater sense of belonging among counter-cultural scenes in the city: going to punk parties with Hare Krishnas, hanging out in clubs, and hanging out in the Chicago hip-hop scene. Eventually Lola entered into an intimate relationship and had her first child at the age of 18.

Lola’s young adult life was a search for a greater understanding of the world and how to find meaning. She read everything she could get her hands on about the Black American experience: books like Soul on Ice by Eldridge Cleaver and writings by Assata Shakur. She discovered the spiritual teacher Michael Beckwith and eventually Bodhi. She describes the process of learning to move beyond deeply painful experiences and the limiting self-definitions that accompanied them and to embrace forgiveness and growth. Finally, Lola shares a practice with listeners to inspire their own growth beyond limiting self-definitions and thought patterns.

Lola also did a TED talk, and appeared as a guest on The Rebel Mindset podcast.

Saul Williams has traveled the world as an artist, activist, and provocateur of deeper and more comprehensive thought patterns. Much of Saul’s music is based on political activism and protest, but in this conversation he describes a project that stretched beyond his usual areas of focus. He says, “I decided to work on this album called Volcanic Sunlight where I just wanted to acknowledge that there were a lot of other emotions flowing through me beyond this dissection of race and class… and I just wanted to express the love that I feel, because in fact everything that I’ve ever said has come out of love.”

They also discuss an increase of Christianity in hip hop. Saul says, “It’s great to have your faith and… what moves you, that’s wonderful. But when I think of that projected, when our military is in predominantly Islamic countries firing weapons and operating on Christian principles out loud, you know? Conflating terrorism and Islam, and rappers are like ‘my God is the greatest God’… from America, I’m like, ‘okay, are you making specifically music for the soldiers to sing along to so they can feel comfortable as they shoot these black and brown kids around the world?’”

They also discuss some of the repercussions of conservative Christianity’s exportation to other countries, including efforts to promote an anti-gay law in Uganda. The Netflix series The Family also documents and explores this gross practice in America’s recent past.

Lola and Saul discuss the upcoming presidential election, and how the 2016 election inspired Lola to begin the project Normal white people. “Using real and untold American history, current events and self-reflection, participants are committed to uncovering personal biases, discovering the changes necessary within the participant, and creating a personal path of inspired action that moves the evolutionary impulse of humanity toward a loving and just global society.”

Saul makes an impassioned argument for Americans to learn the true, untold history of the country and its founding. One source we recommend for further reading is Howard Zinn’s A People’s History of the United States. 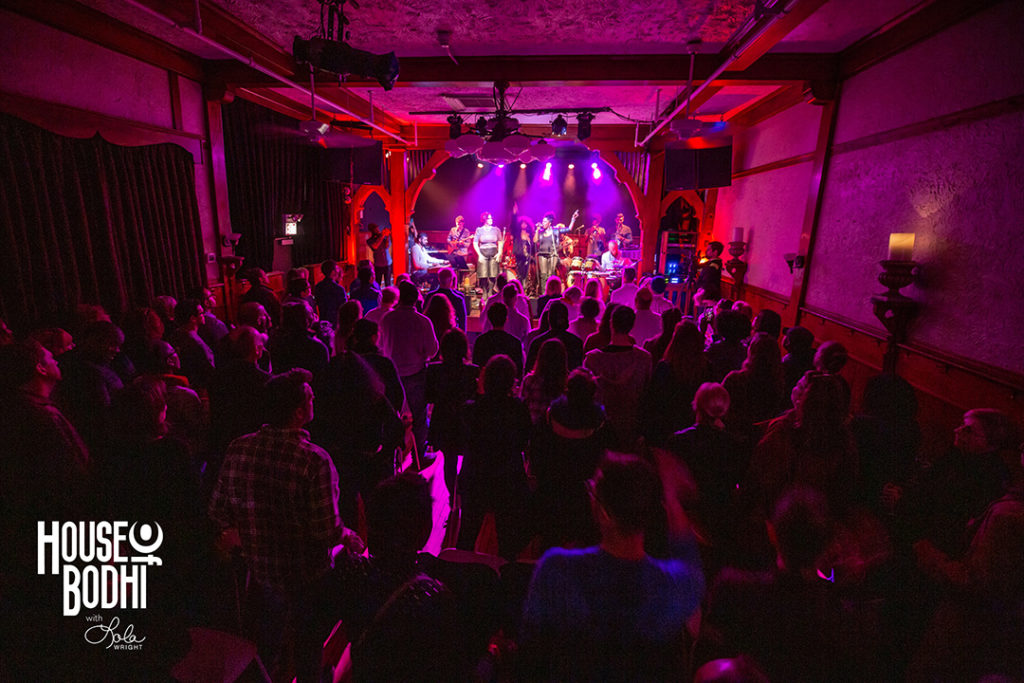 House of Bodhi with Lola Wright

On Tuesday, October 22, 2019, Bodhi kicked off a new project at Schubas Tavern with some of Chicago’s most brilliant creatives. This project is a traveling house dedicated to awakening.
END_OF_DOCUMENT_TOKEN_TO_BE_REPLACED

Host Lola Wright interviews inaugural guest Saul Williams. Williams has traveled the world as an artist, activist, and provocateur of deeper and more comprehensive thought patterns. This episode features the first installment of their two-part conversation. They discuss Williams’ evolution out of the faith he was raised in, and his incredible ability to give space and place to the full range of his emotions. They also get into family life, sharing stories of how they dealt with their parents’ evolution when they were younger, and now navigating life and change as parents themselves.

House of Bodhi |Awakening is for the many…

Awakening is for the many not the few.
1 Minute Clip from October 22, 2019 at Schubas, Chicago

Each month, Lola curates a live gathering at an iconic Chicago music venue with the inspiring musicians of the Bodhi House Band and original work from Chicago’s most moving cultural leaders.

END_OF_DOCUMENT_TOKEN_TO_BE_REPLACED

House of Bodhi | Awakening is for the many…

Awakening is for the many not the few.
3 min HOB Clip from October 22, 2019 at Schubas, Chicago

Each month, Lola curates a live gathering at an iconic Chicago music venue with the inspiring musicians of the Bodhi House Band and original work from Chicago’s most moving cultural leaders.

END_OF_DOCUMENT_TOKEN_TO_BE_REPLACED

Welcome to the House of Bodhi

1 Minute Clip
Each month, Lola curates a live gathering at an iconic Chicago music venue with the inspiring musicians of the Bodhi House Band and original work from Chicago’s most moving cultural leaders.